Hanna Somatic Education — a look at the larger picture

The time has again come for us to take a fresh look at the status of Hanna Somatic Education as a world-level teaching.

By that, I mean our role in alleviating the pain of the billions of people who are presently at the mercy of “less effective” clinical modalities and of the “ten thousand natural shocks flesh is heir to”.

We, who number in the small hundreds, represent the seed stock for what may be a body of practitioners adequate to serve those billions.

Puts things into perspective, doesn’t it?

Now, to accomplish that end (which is a many-decades long project, even with exponential growth that we have yet to see, in the number of proficient practitioners), two things need to happen.

Now, after nearly twenty-one years of practice, I can tell you this, from my experience:  Lessons 1, 2 and 3 are highly potent, virtually “sure-fire” as Tom Hanna said to us, Wave 1, students.  I almost never have to repeat a session with a client; one pass through virtually always gets the job of each lesson done (with rare exception).  I expect that to be true of any proficient practitioner.

A fair number of former clients of mine have gone to the Novato Institute and SSI trainings.  My point is that to receive good work has been their inspiration to become practitioners — and I believe that highly proficient practitioners are, for now, our best source of more practitioners — hence, the further importance of everyone developing and practicing at a high level of proficiency.

As the more highly proficient trainers age and retire, who is going to replace them? and what will be their level of proficiency? — which is all they can transmit to their students.

I’m not talking about a higher standard; I’m talking about the minimum acceptable standard — which is getting the results I get.  Why?  Because the students should exceed the teacher; if they don’t, the teaching is in decline.

For my part, in addition to giving private sessions, I have created and am still adding to my website, which nowadays gets about 30,000+ visitors, monthly and comprises some 245 pages.  That means that, since 1996, some millions of people who were looking for help with chronic pain have at least been exposed to somatics.  Through that website, I do what Tom Hanna did:  I publish information about somatic education and I sell somatic exercise programs to people, worldwide.  (I’m now considering re-doing the look of the site — another large task for which I’m hoping to find a shortcut.)

How about this:  Pain management is a major cost in medical treatment.  Huge amounts of money are spent on pain management, on conventional physical therapy; huge amounts are lost in productivity due to the three reflexes of stress and the inability of the medical system to manage pain and lost mobility effectively.  Do you know how large the Medicare budget is?  how much is spent on medical insurance that covers procedures that get so little done so slowly, compared to what we can do so quickly?  I’m talking about a major proportion of our country’s gross national product, comparable in scale to the military budget.  Kind of awes you, doesn’t it?

We have a role to play in the recovery of the world economy.

Now, how are we going to do it?

One key is “mass production”.  We can’t mass-produce proficient practitioners — not, at least, until we have enough highly-proficient trainers producing highly-proficient students who become trainers, to support exponential growth.  The only way it’s safe to “slack the reins of control” is if exactingly high training-and-certification standards result in top-notch practitioners who become top-notch trainers.

What can be mass-produced are self-relief, somatic exercise programs.  We need to infiltrate social institutions.

We’re the wine — but still new wine.  Standard and most “alternative” practices and the mindset that they embody are the cork.  They should and will stay in place until the wine is ready — and then they should be pulled from their closed position so we can pour out.  Maybe we can do that by positioning ourselves as “helpers” to them, but ultimately “the truth will out”.  We’re the vanguard.

Know that whatever we decide and do (or don’t do) has consequences.  We need everyone’s higher intelligence.

I have set myself to the task creating mass-producible instructional programs that address needs not being well-met by bodywork, therapy, and standard medicine.  My most recent was a program to address TMJ dysfunction.  I’ve also had new success with improving eyesight (mine) and with resolving deep pelvic pain and S-I joint syndrome.  People need a program for resolving neck pain, and I’ve got the essentials for that done in raw video.  I’ve developed a technique for multiplying the effectiveness of somatic exercises (fewer repetitions, less time, more accomplished) and written on somatics from “unusual” perspectives.

Personally, I am more interested in training practitioners than in doing one-on-one sessions (which are about the closest thing to instant gratification that I know) or in producing publishable programs.  Training others is a way to multiply myself and the benefit I can bring to others.  However, I’ve delayed organizing trainings until I’ve gotten those other tasks done, even though I’ve had quite a few training inquiries in the past few months.

That’s where I stand.


LISTEN to the forward to
The End of Tyranny, by
Thomas Hanna, a voice in
the tradition of Thomas Payne: 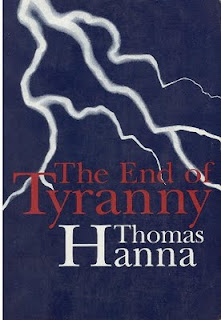 Purchase The End of Tyranny

Add your comment — what you would like to ask or tell.
This entry was posted in Uncategorized. Bookmark the permalink.